Although I wasn’t able to see any attractions while I was in San Antonio, TX, I did check out my Trip Advisor app to see what was around me. I was surprised to discover that there was a toilet seat museum. That’s AMAZING! Another thing that life has to offer if you open up your eyes and look around. 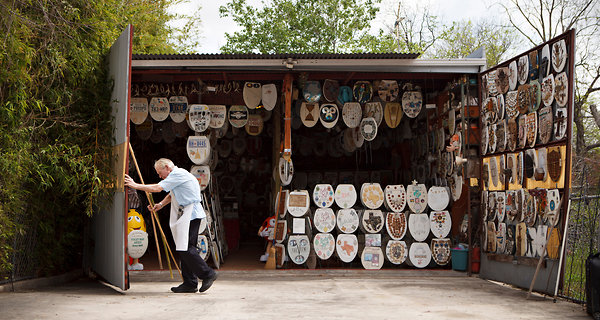 I checked out the reviews to see why this was a five-star attraction on Trip Advisor, and it seems that the attraction is secondary to the owner himself, Barney Smith. People were raving about his personality and how special it was just to be around him.

One thing that I have long held true in the art of being human is that people are interested in people. I could be an amazing magician and have a lousy personality and nobody will really care about my show. I wouldn’t be memorable. The same holds true with a toilet seat museum. I can imagine that if you had no personality you wouldn’t be able to keep an attraction like that open for long, or in the very least you wouldn’t be making any money.

Barney Smith is making his oddball museum a success because of Barney Smith, not because of some decorated toilet seats. Card tricks, toilet seats, and everything else under the sun are simply good excuses for people to relate to one another, and nothing more. It’s not about what we usually think it’s about.

Camping in the woods of mid Tennessee, we decided that it would be a good idea to burn an apple core so we didn’t attract critters. This had the opposite effect, as we were immediately surrounded by some persistent raccoons.

They kept coming a little too close for comfort so I gathered a bunch of stones to toss at them as they got closer. This worked wonders. (No animals were harmed during the writing of this post!!!! Just scared a bit.)

When it came time to retire to the tent, I dumped the stones out of my pockets and put them in front of the tent. Good idea except that as soon a the stones were down, I couldn’t get “The Blair Witch Project” out of my head. This didn’t make for comforting sleep at all. Solitude in the middle of a large woods is not peaceful if you keep thinking of that movie.

On a side note, I left the tent to use the bathrooms later and saw that the raccoons did indeed attain their goal. The burnt apple was gone.