Day 3 (June 3, 2015) – Sioux Falls, SD to Billings, MO (660 miles). Stopped in Montrose, SD not too long after we started out because we saw a giant metal sculpture of a bull, and that is usually how we go sight-seeing. Something catches our interest and we stop. It turned out to be Porter Sculpture Park, and we talked to the artist, Wayne Porter, for a while, and paid to walk through the sculptures ($8 US per person, Amelia was free. He offered us a golf cart to drive through the park because we were carrying a baby, but we declined – too much driving, the walk sounded great. (I have a link to a gallery of my photos I took at the park here. I also have a standing offer to stop by when I have more time and have a beer with Wayne – which is now on my list of things to do. But not this trip. 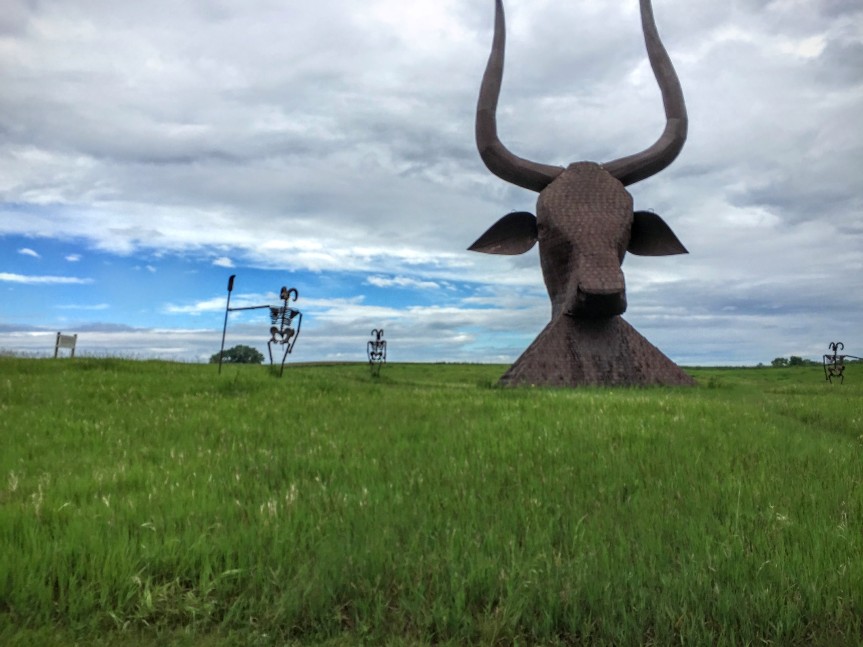 We also made a quick stop at the (apparently) famous Wall Drug Store in Wall, SD. It was a little too touristy for our tastes, but they had diesel for the micro-van (VW Golf).

One really cool mention about Wall Drug was the sanctuary – it seemed really peaceful -after all that driving and then stopping at Wall and seeing  hundreds (edited: author is prone to hyperbole) of people walking around making noise – to walk into the sanctuary where there was a nice respectful silence. People were noisy until they came in, and then serenity kicked in. 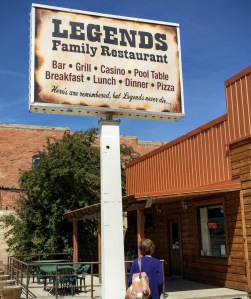 Day 4 – Billings, MO to Spokane, WA (540 miles) This is where we started getting into the mountains END_OF_DOCUMENT_TOKEN_TO_BE_REPLACED

THE SHORT: For those that don’t want to read the long description, here is the short one: The guy who took this picture had one child who was standing next to him at the time of the picture. He had just built the deck, and he took pictures from three angles – this is the only angle in which the figure appeared.

THE LONG: This house is across the street from me. My neighbor is the owner, and he also owns the auto repair garage which is nearly across the street from me. He also plows my driveway. And he helps in the summer with his gigantic excavating tools and 12 foot rototiller. An all around “get’er’done kinda guy. He has always been an awesome, but he’s also that gruff, no-nonsense guy – not the type of guy that would make up ghost stories. He used to live in the house pictured above, and when he moved out of it, he built the porch and was preparing everything so that he could begin renting it out.

I was out in my yard talking to him one sunny day, telling him about an idea I had for a short story. I called it “The girl in the window.” He asked me why I would call it that, and then he proceeded to tell me the story of the picture we are looking at. I had imagined coming home, pulling in the driveway and seeing a girl in my upstairs window, and the similarity was just too much for him to hold back his story.

At the time of this picture, there were, on his word, no kids in the house. There was no one in the house at all. He points out specifically that there were no grandkids yet. They took the picture to a psychic who talked about a ghost. The psychic reading on the picture holds no weight with me. But just because a psychic said it, doesn’t mean it’s not true.

This is the best ghost pic I have ever seen (whether it’s real or not) and the coolest thing is, this came not from an internet search, but from a neighbor. How many pictures are there just floating around in the world, held on to by a culture that doesn’t post things on the net? Thousands? It gives me hope, the great mystery of life. 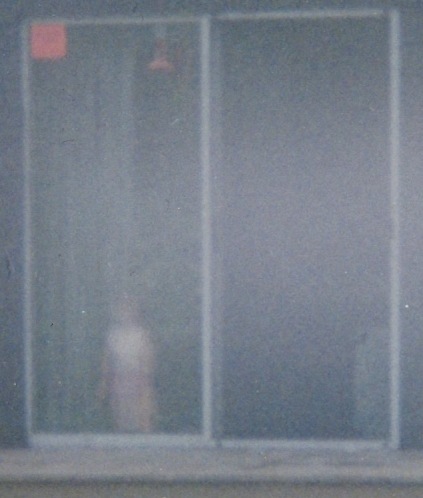 These are from my 2009 paranormal investigation (read: ghost hunt) at the Willard Library in Evansville, IN. The ghost is supposed to be haunted by the “Grey Lady” as they call her. So that’s who we were looking for. It was a fun night and I met a lot of cool people. Every single one of them was tenanted by tangible form*, however. I feel like I may have caught a picture of the ghost, but I hesitate, because I don’t really believe that. I’ll let you decide what to think about the following pictures. I have never shown these to anyone.

This is the original unedited shot. I just pointed and shot for the hell of it. I didn’t “see” anything until I looked at the pictures later.

Ultra brightened from original. Or some other filter.

*in Poe’s Masque of the Red Death, he uses the phrase “Untenanted by any tangible form” to refer to the entity.

Then, summoning the wild courage of despair, a throng of the revellers at once threw themselves into the black apartment, and, seizing the mummer, whose tall figure stood erect and motionless within the shadow of the ebony clock, gasped in unutterable horror at finding the grave-cerements and corpse-like mask which they handled with so violent a rudeness, untenanted by any tangible form.

Once again, there are certain memories that I just don’t want to forget. I don’t want to let them slip away as so many of these things do.

In April 2005, I was visiting Erie, PA because of the deaths of my aunt and uncle. I was pondering life, as I often do during such times. Sitting outside my parent’s house smoking a cigarette, I watched a Monarch butterfly flying around, about twenty feet away from me. This brought back the memory of a movie I once saw, where someone else was dealing with death and at the end of the movie, a butterfly either landed on someone’s nose, or just flew around in front of them, I don’t remember the movie too well.

So I’m watching this butterfly, and I think to myself, “what if it landed on my nose. How weird would that be?” and the butterfly, almost immediately, flew over to me and landed, not on my nose, but on my eyebrow. I was stunned. I don’t really like “bugs” crawling on me, but I didn’t wave this one off. In fact, I wanted a picture. I walked into my parent’s house and looked for my camera. I couldn’t find it, and my mind was preoccupied. This was CRAZY. No camera, nobody’s going to believe me.

In my frantic search for some way to capture this moment, he (she? it?) apparently didn’t like all the commotion, and went on his merry way, leaving me this strange gift (the memory) that I’m really not sure what to do with. So, I’ve only told a couple of people about this, and they seemed to believe me, but you can never tell the thoughts going around in someone’s head.

“I, like God, do not play with dice, and I don’t believe in coincidences.”
-V for Vendetta

I really don’t know what it was that happened, but I thought about the thing landing on me, and it did. That is too hard for me to chalk up to coincidence. I tried.

#party at UPMC park #myerie #music #mb3
I found a better #officefortheday #lakeerie #rumrunners
The best #office of all. #outside
Beautiful day to get out on the #water on a #kayak. #dadanddaughter #presqueisle
My new #office #decoration. #music #album #award #blues
Another #magic #book #published 2019 - most fun I’ve had writing a book. The #interview included #fireball and #snacks
#fathersday #card de mi hija #family #<3
#exciting things are starting to happen out here. #garden #food #tomatoes
#art #project for Amelia
My #first #snake of #2019 , #hiking in #erie #Pennsylvania
#newyear #celebrate #musicianslife
I should leave the #christmas #cookiedecorating to @cambridgesprinkles from now on. But it was still fun. :)
A Mixed Up Christmas, by Matt Bennett. #EDM, #ElectronicMusic and #Trance, with some #Jazz, #Blues, and #Orchestra #music in there to mix it up. Digital downloads available at Bandcamp (http://bit.ly/2TXCUva) and CD Baby (http://bit.ly/2zs1Q5i) and you can order a physical copy here: http://bit.ly/2KFnSpL
Office hours #work #working #kids #cats #computer #cute
#edm #album 2018. Physical #cd is here!!!
5 #albums since 2016. #music #edm #blues #producer #singersongwriter
Well, now that there’s #snow, we’re ready for this :) #Christmas #Holiday #music #edm #electronicmusic http://matthewbennett.bandcamp.com/track/oh-come-emmanuel
#chain #city in #Cleveland #Ohio
#creepy #old #house in #ohio
Janelle and I at the Rock Erie Music Awards! #rema #mattbennettblues #musicianslife #mb3 #lucky