Day 3 (June 3, 2015) – Sioux Falls, SD to Billings, MO (660 miles). Stopped in Montrose, SD not too long after we started out because we saw a giant metal sculpture of a bull, and that is usually how we go sight-seeing. Something catches our interest and we stop. It turned out to be Porter Sculpture Park, and we talked to the artist, Wayne Porter, for a while, and paid to walk through the sculptures ($8 US per person, Amelia was free. He offered us a golf cart to drive through the park because we were carrying a baby, but we declined – too much driving, the walk sounded great. (I have a link to a gallery of my photos I took at the park here. I also have a standing offer to stop by when I have more time and have a beer with Wayne – which is now on my list of things to do. But not this trip.

We also made a quick stop at the (apparently) famous Wall Drug Store in Wall, SD. It was a little too touristy for our tastes, but they had diesel for the micro-van (VW Golf). 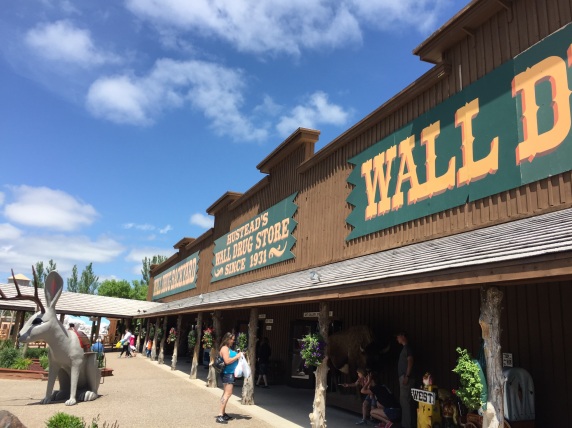 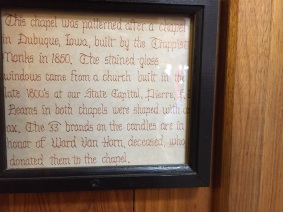 One really cool mention about Wall Drug was the sanctuary – it seemed really peaceful -after all that driving and then stopping at Wall and seeing  hundreds (edited: author is prone to hyperbole) of people walking around making noise – to walk into the sanctuary where there was a nice respectful silence. People were noisy until they came in, and then serenity kicked in.

Day 4 – Billings, MO to Spokane, WA (540 miles) This is where we started getting into the mountains. It wasn’t too bad, although there were a few times when I could see pretty far down, and vertigo kicked in. Nothing as bad as in my imagination or my dreams. Stopped in Whitehall, Montana and ate lunch at Legends Bar & Grill for a Blue Cheese Bacon Burger and their soup of the day, cheeseburger soup. Mmmm… We finally arrived in Spokane, WA after a long trip though high places. We stayed downtown at the Ruby Hotel. I am in love with this hotel and with Spokane in general. The hotel seems to be dedicated to music and art and combinations of these, and the beer was buy one get one free. Yay!

Walking around downtown was a lot of fun – it’s a beautiful city and the people were all very polite. It had a very artsy air about it that I have never heard of when people mention Spokane.

We ate at the Steelhead Bar and Grill, which would have been an amazing time due to the spectacular food there – except we had a near-screaming baby, so we took turns going outside and pushing her stroller around to get her to sleep. We ate alone, at different times. Life is still good though!   Days five and six coming soon…

This site uses Akismet to reduce spam. Learn how your comment data is processed.