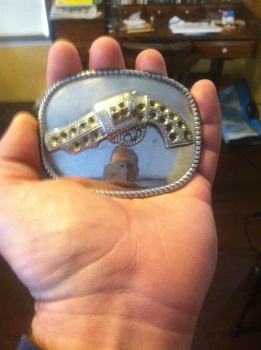 I used to walk Bardstown road in the Highlands when I lived in Louisville, KY, getting myself partially inebriated on local brews. On on particular occasion during my walk home, I met a cool group of people coming out of a gas station that I was going into. I’m pretty sure they struck up the conversation and invited me to their little porch party at an apartment, less than a block away. I hung out with this group of four for a couple hours, and we had some laughs, and I ended up doing some magic for them.

This turned into a regular thing, as they were always partying on the porch, and I was always walking home from a bar. They would invite me up, and we’d chat for a couple of hours. It was strange, but we never became “friends” – we never got personal.

Mostly we talked about conspiracy theories. It was never about magic. Maybe every other time, or every third time I’d go over, they would bring up magic, and ask me if I could do something for them. I did mostly mentalism and card tricks. I had this great book of Annemann’s (about mentalism with cards) that I was studying, so I practiced on the group. This went on for about five months. (Mid-April to mid-August.)

Then, I had a bout with an odd brain disease. Spontaneously Low Cerebral Spinal Fluid Pressure/Spontaneous CSF Leak. It’s a long name, I know. (My friend Rhonda said, “Only you, Matt. Only you gonna get somethin’ like this.) Anyway, what it really meant was that END_OF_DOCUMENT_TOKEN_TO_BE_REPLACED